“Let’s switch gears” We’ll take a break from talking about dataflows and turn attention back to Power BI datasets. In Part 22, I proposed using the Gherkin language to implement testing - thanks to version 4 of Pester. At the time I was using it for dataflows, but I have since realized I could use it to gain efficiencies while testing Power BI datasets.

After spending some time with testing Power BI datasets using a technique from Part 4, I identified some areas for improvement:

Pester Version 4 and its Gherkin language implementation seemed like a logical approach because I could abstract the technical work within the ‘.steps.ps1’ file from the .feature file which would contain tests that could be written in plain language by a data analyst. But there are a few challenges when running the same tests both on your local machine or against the Power BI Service (via a Continuous Integration pipeline):

After some trial-and-error, I produced a solution thanks to (1) how the awesome gentleman at GuyInACube used PowerShell to identify the local network ports opened for Power BI Desktop files, and (2) by reviewing DAX Studio’s way to figure out which network port was associated with the Power BI file opened. This is a great case for why open source is awesome, and I’ll return the favor by making the Get-PowerBIReportsOpenedLocally module open source as well.

With those challenges overcome, I could build a potential framework to the three areas of improvement. Based on a sample project I have uploaded to GitHub here is what it looks like:

Building and running tests are based on the Behavior Drive Development (BDD) concept. Pester Version 4’s implementation of the Gherkin language facilitates BDD testing by defining tests through written narratives and acceptance criteria.

Building tests are based on two files:

Within this project there are two sample .feature files:

This feature file shows how you can test the schema and content of the Power BI dataset. The following is an example implementation: 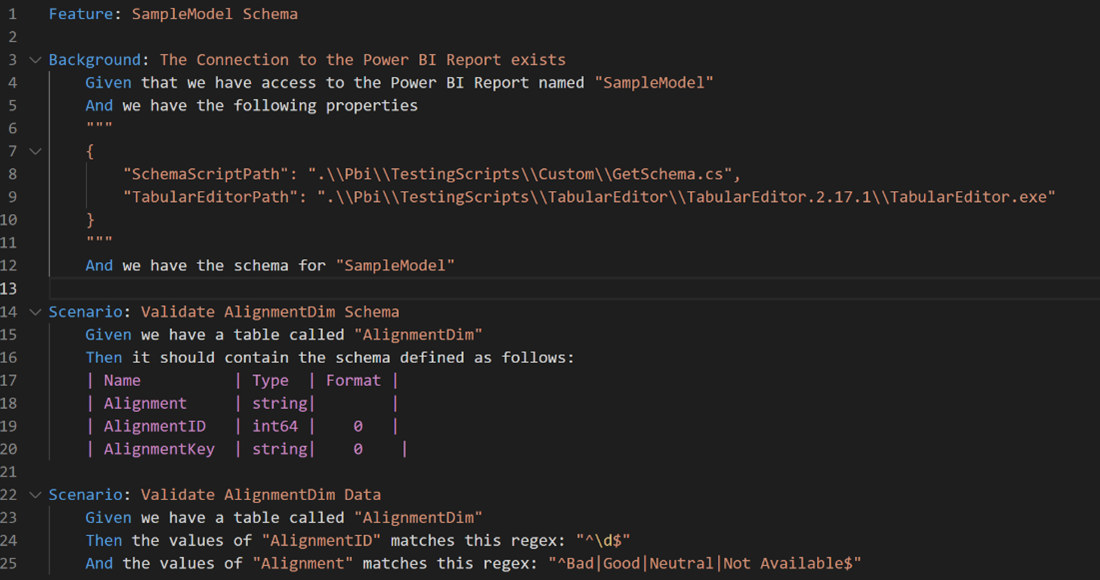 Each sentence executes a test, which for the example above does the following:

This feature file shows how you can test a Power BI dataset using DAX. All tests should result in an output that is consistent so that the automated tests can verify the tests pass. Fortunately, with DAX, we can create that schema. The example below provides the output of a set of test cases and follows a simple format: 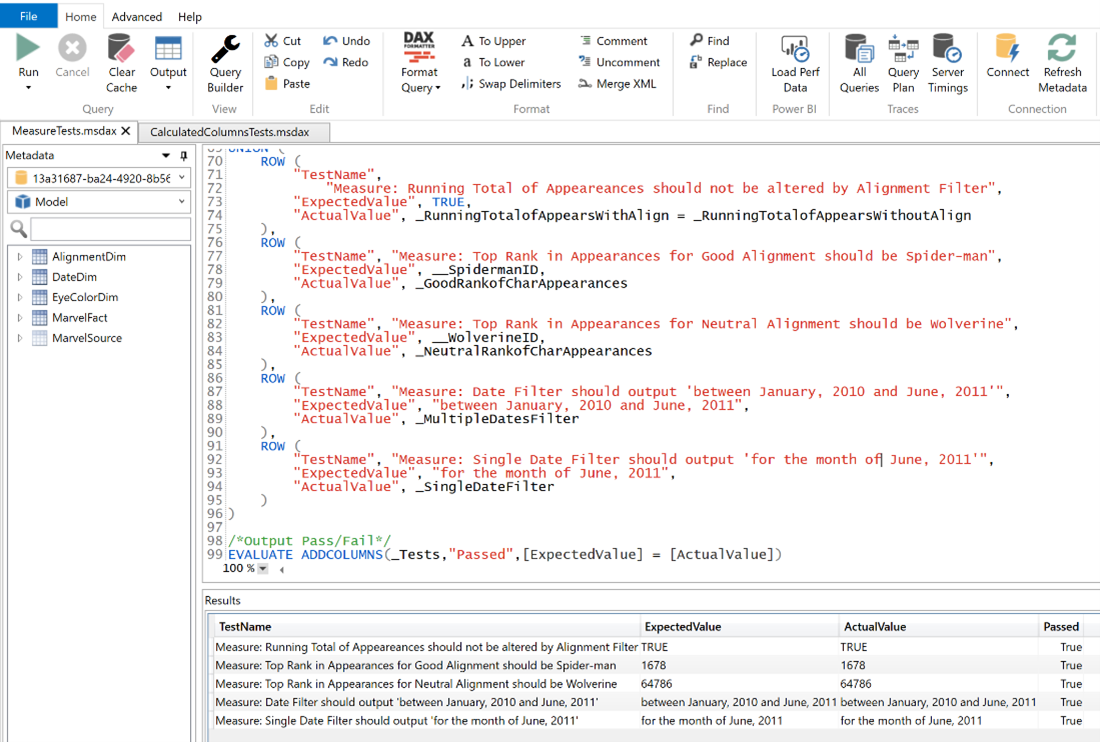 By leveraging a consistent schema to build tests using DAX, we can automate the testing of multiple DAX files. In this template, we have 3 files (CalculatedColumnsTests, MeasureTests, and TableTests). Therefore, the feature file to run multiple DAX test files is shown in the example below.

Each sentence executes a test, which for the example above does the following:

Since we want to take advantage of the same PowerShell code to run similar schema and DAX tests, all “.steps.ps1” files reference the file “Test-Support.steps.ps1”.

Verifies the parameter {PBIFile} exists as a .pbix file within a subfolder under the /Pbi folder.

And “we have the following properties”

Accepts a json file that lists the location of Tabular Editor and the GetSchema.cs file. This merely checks to see if those files exist so we can conduct further tests.

And “we have the schema for {TableName}”

Accepts the {TableName} parameter and uses TabularEditor and the GetSchema.cs file to pull the schema information for the table. If the test case can get this information, it passes.

Then “it should {Contain or Match} the schema defined as follows:”

After the prior schema test this test accepts a table of information with the columns Name, Type, and Format such as:

This test accepts a parameter {Contain or Match}. If the parameter entered is ‘Contain’ then this test will make sure each column exists and matches the type and format. If the parameter entered is ‘Match’ then this test will make sure the table has all the columns defined in the test, that each column exists, and that each column matches the type and format. The ‘Match’ value is strict and makes sure no new columns exist in the dataset compared to the defined table in the feature file.

Given ‘we have a table called “{TableName}”’

Accepts the {TableName} parameter and makes sure table exists in the dataset.

And ‘the values of “{ColumnName}” matches this regex: “{Regex}”’

Given ‘we have the {TestFile} file’

Verifies the parameter {TestFile} exists as a .msdax or .dax file within the subfolder defined by the PBIFile in the Background tests.

Then {TestFile} file should pass its tests’

This queries the dataset defined by the PBIFile in the Background tests using the DAX file defined by the parameter {TestFile}. If the query returns an acceptable schema and all the expected values equal the actual values in the query results, the test will pass.

This project has a script called “Run-PBITests.ps1” that exists at the root of the project.

This script allows you to run the tests you created for each Power BI file that is open. Here are the steps:

One of my favorite parts about Pester is that it will allow you to produce the test results in the NUnit format. Therefore, now when the testing completes in a CI pipeline it can publish those results to Azure Test Plans. Thus, we have a more centralized way to monitor and track testing. 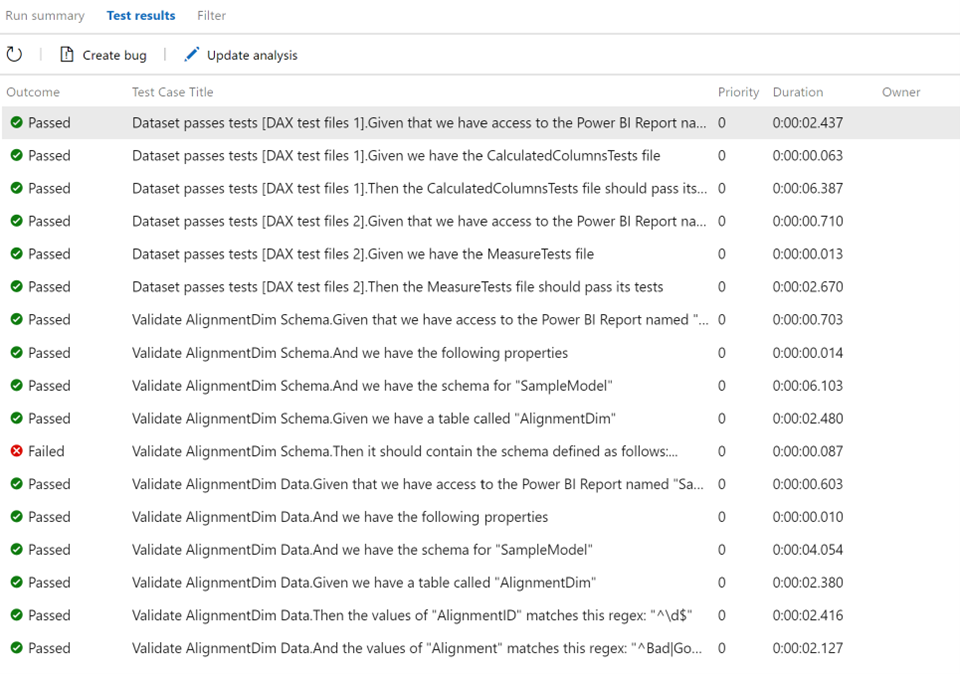 I’ve shared instructions on how to setup a template project, cloning that project locally, and running tests on GitHub. My hope is that you can leverage these samples to start to build a suite of datasets backed by source control, tested using an easy-to-use framework, and automated through orchestration.