“Time is money”… Continuing our work from Part 10 we have the data to help us understand (1) if self-hosted agents run faster than the Microsoft-hosted agent and (2) if we get a return on investment using a self-hosted agent by not paying staff to wait for a pipeline to run.

To do this in Power BI involved a little bit of research. First, I wanted to avoid inputting any data manually, so that it could be templated for other projects. That meant I had to figure out how to work with the Azure DevOps and Azure Pricing APIs.

First, either the documentation had some issues or my reading comprehension was failing me (a possibility). Regardless, I had three issues:

After that, I used Web.Contents to query the Pipeline and Builds API endpoints and that was straightforward. If you’re not familiar with Web.Contents, I suggest reading Chris Webb’s article as it is the best documentation out there.

Have you’ve ever tried to figure out cloud pricing and felt confused? Do you like pain? If so, then try to interpret the Azure Pricing API and the JSON that is returned. Trying to figure out the right combination of “serviceFamily” and “serviceName” for Container Registry and Container Instance pricing took countless rounds of attempts in Postman. On top of that, I wanted to get all the Azure regions from the Azure Pricing API since issue #3 with the Azure DevOps API existed. I couldn’t find that endpoint either (double facepalm). I settled with just getting a distinct list of regions from the Container Registry pricing call. Not perfect, but it works.

Whew… that was probably a lot of complaining but for me that was truly cathartic. Plus, I offer you this template on GitHub so you don’t have to be bitter like me.

With the dataset in place, it was time to get the answers into some visuals. From experience, I found an executive summary highlighting the return of investment (ROI) resonated far more with a boss than a chart. That’s why the template Power BI report looks like this: 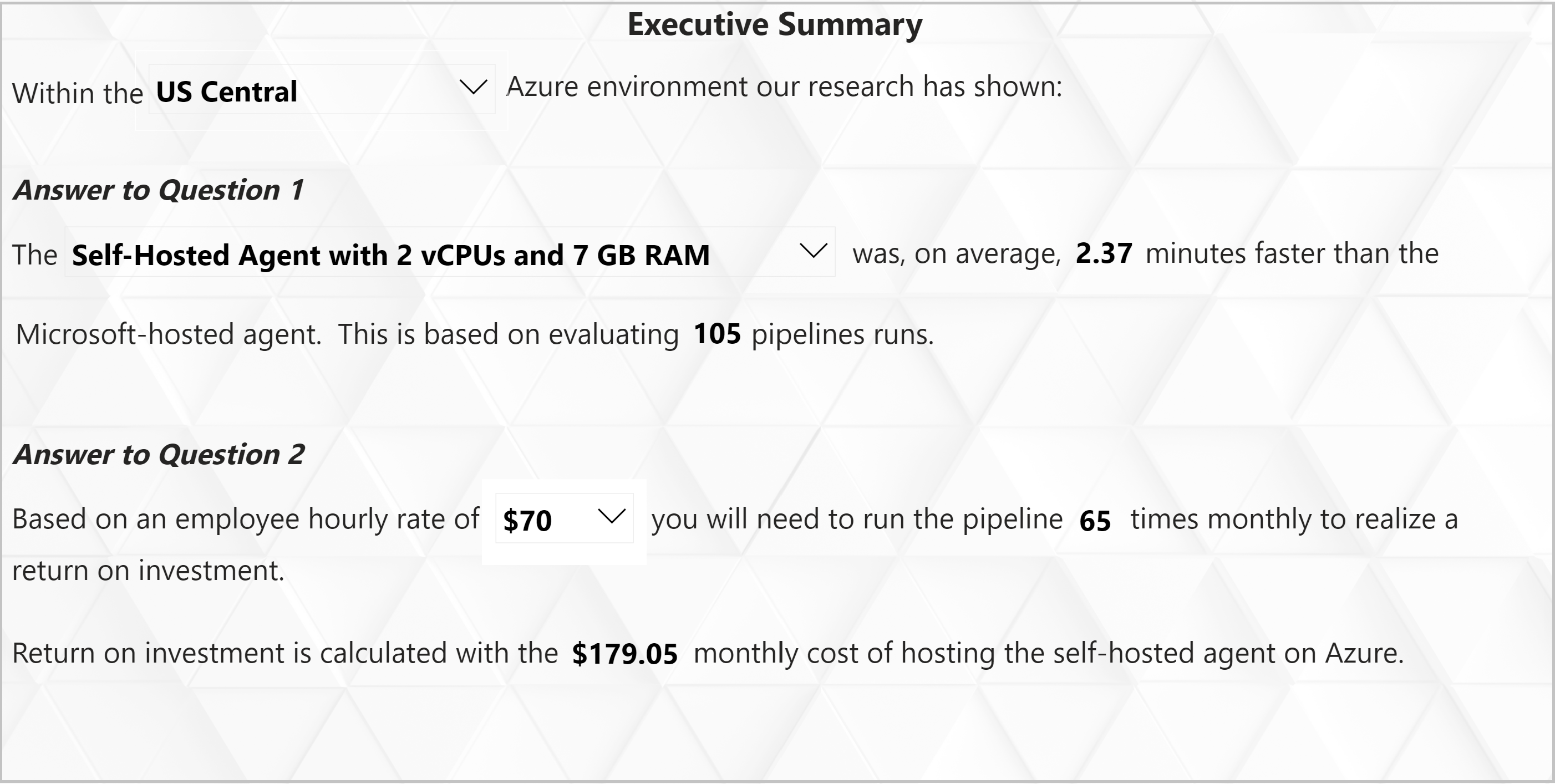 By selecting those three drop-downs, Power BI measures located in the Measures Table will take:

The Results Are In…

As for my recent project, the executive summary answered the questions from Part 10 as follows:

Question 1B: How much faster can a self-hosted agent run versus a Microsoft-hosted agent? If I increase RAM or virtual CPUs by 50% is there a gain in performance?

Question 2: Is the cost for running a self-hosted agent cheaper than having staff not wait for pipelines to run? If so, how often must the pipeline run to realize savings?

Answer 2: For confidentiality purposes, I won’t divulge the hourly rate I used, but the answer was yes and the number of monthly runs required to achieve ROI was realistic.

For those that went through Step 10, the Power BI template and the setup instructions for Part 11 have been posted on GitHub. And if you want to try out the Power BI report using data I generated, try it out at this link.

Despite the trials and tribulations of working with the APIs, in the end we were able to empirically show whether or not a self-hosted agent would improve efficiency, saving time and money! As always, if you have any thoughts on this article or corrections/solutions to the issues I had with the APIs, please me know what you think on LinkedIn or Twitter.